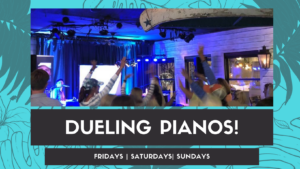 Nate Sangsland has always been musically gifted. From a young age, he was singing, performing, and playing a variety of instruments. A former student and music major at University of Indianapolis, and a post 9/11 US Army Combat Veteran (2001-2005). While stationed in Germany in the US Army, Sangsland was a regular pub guitarist in Europe. Currently, Nate is based in Destin, Florida and has been performing as a soloist and dueling piano entertainer since 2005. Currently Nate owns his own entertainment company “Sangsland Entertainment”
These days you can find him playing In Panama City Beach, Destin, and Old Florida Fish House on 30-A on the weekends.